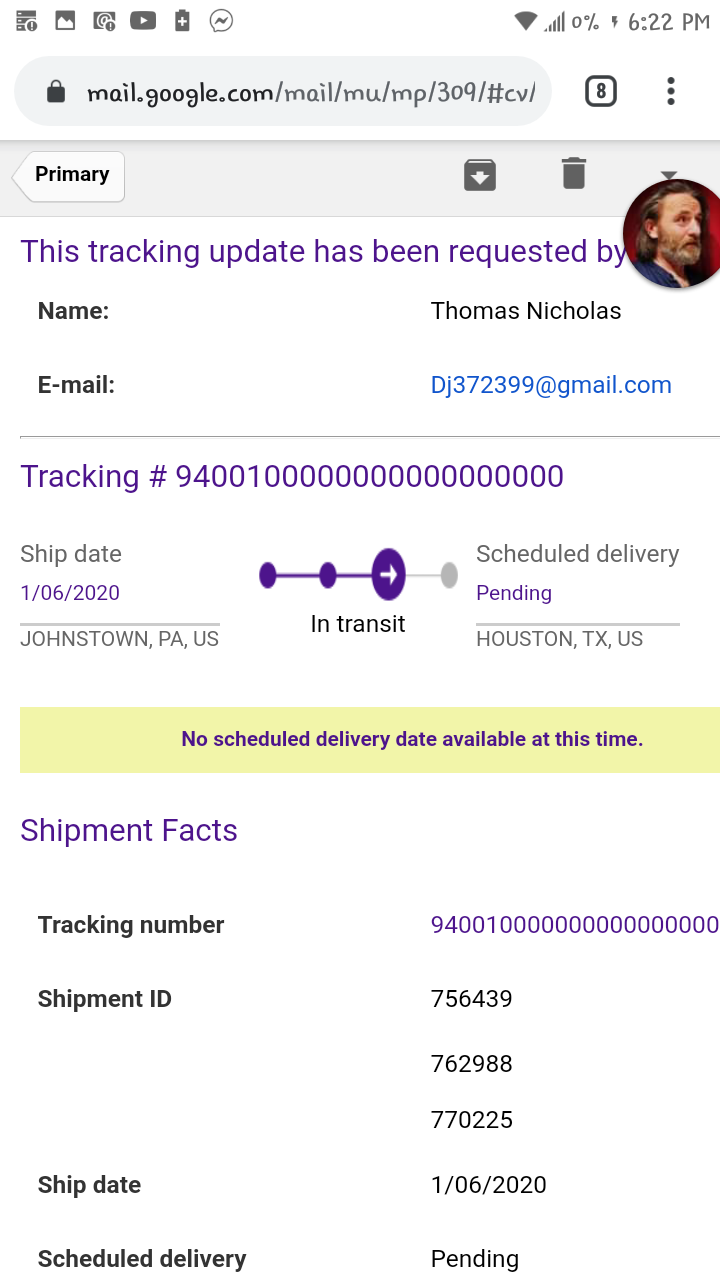 I am a victim of thus scam as well. $285.. I have all the text communications and screenshots of my payments but, low and behold no FedEx no winnings. I was even sent an email supposedly from FedEx starting a delivery was pending. I personally want to see this game burn. I sacrificed a day of work waiting for nada. I am livid!
T.Nicholas Apparently the scammer is impersonating the real Dave Johnson on Facebook. Be careful and don’t accept a friend request from him. No millionaire in their right mind would want to have random friends.

call from a David Johnson, ref: civil case against me. did not mention what company he worked with or the client. I needed to retain an attorney to resolve the matter to contact him at 833-739-0507

I got an email from David Johnson, supposed to have won $298,000 Powerball in NY. But the picture shows him at a Casino with a winning lottery check. The email says I am receiving this email correspondence from Kevin Patel 513-909-8112, Financial Manager, [email protected] for David Johnson’s money w/Nationwide Bank U.S. It says I’ve been chosen along with four other people for disbursement fund to his foundation. He’s supposed to give 5 million dollar checks to five people. The catch is they want me to pay $520 for a courier. He says he’s from Columbus, Ohio. He said there are three Nationwide banks in Columbus, Ohio. Yesterday I asked him three questions; how did he get my name, he said he didn’t know. Then I asked if he would accept a money order, he said no it would have to be wired. I asked him if he was at home or at the office. He kept talking, I told him to shut up. I asked him to send me a text of the check from Nationwide. Then I told him he was a scammer.

I found him on Instagram saying he was giving 30,000 to his first 500 followers and had videos and pictures of people with the money. He messaged me and everything seemed legit but then he said buy a $70 amazon gift card. If hadn’t said that I would have felt for it. What I wonder is whether people were just using his identity or if he was also behind the scam

Type of a scam Tech Support

Rec’d call April 30, 2018; advised may have trojan/hackers on my laptop that may affect laptop(2), emails, cell phones, internet router, printer, TVs, etc. and may also affect bank/credit cards. He stated I paid $799 on May 5th 2016 or 2017 to Instant Resolve (vendor for Microsoft) for 3-year service agreement. He requested and obtained access to computer and showed me csrss (?) in Task Manager, and stated that it was a trojan and that all virus protection had been "stopped". Also stated, Anti-Hacking Corporation is a gov’t obtained company that would be working on my problem because nothing was wrong with the computer; therefore, he (Instant Resolve Inc.) could only help if something was wrong with computer. He placed me on hold and contacted Anti-Hacking for help. Requested I obtain $499 Google Play card so that Anti-Hacking could install McAfee Norton on each affected item. I purchased two $500 cards, scratched and provided serial numbers via phone; additional cards were not purchased. On May 1, 2018, he called and asked if I had obtained the additional cards. Since I had not, he stated nothing could not move forward because Anti-Hacking had prepared for ALL items (including funds) to be completed. I asked if the $1000 could repair the main items affected. Stated that would not work and no further attempt would be made and funds were lost. I would supposedly, be refunded $499 from Instant Resolve because they could not fix problem; and funds on google cards would be refunded to my credit account after resolution was obtained by Anti-Hacking Team Corp., who would only need to use $499.99 to purchase and install Norton McAfee on each devise ($499 x 4).

Victor – Victim Location 44056 Type of a scam Tech Support My computer alerted me that something was wrong and a box popped up of a number I had to call to fix it or otherwise it would stop working. I called and they walked me through what was wrong- my firewall was down- and…

Johnathan – Victim Location 75110 Total money lost $6,000 Type of a scam Home Improvement Josh A. and Gavin S. came to my house and gave me this spill of all the work he was gunna do painting, wood work, fixing door trim, and doing my roof plus NEW gutters. well I gave him a…

Ana – Victim Location 83651 Type of a scam Tax Collection Received a phone call claiming a new law was going into effect in January called Foreign Account Tax Compliance or FATCA. Claims needs all your tax information, such as tax ID number, social security name address, etc. Tax commission tells us this is a…

Cindy – Sep 12, 2020 Victim Location 43431 Type of a scam Online Purchase Fake website displaying stolen pictures of dogs being “sold” at half the regular price. The person running the scam is quick to initiate payment via Cashapp without any proof of the dog being in their possession and claims it will be…

Martin – Total money lost $3,400 Type of a scam Sweepstakes/Lottery/Prizes A company called "Power-Ball Lottery Claim Agent Center" is friending people and then saying that they won millions of dollars and that they noticed that they saw your name on the sweepstakes winning list – they give the link and the person can follow…

Amber – Type of a scam Employment this person will contact you saying they got your resume off a website, in my case indeed.com this is one of the emails i recieved after several emails back and forth Congratulations! You are accepted to the Umbrella I.T. Services Company position for the trial period. We have…